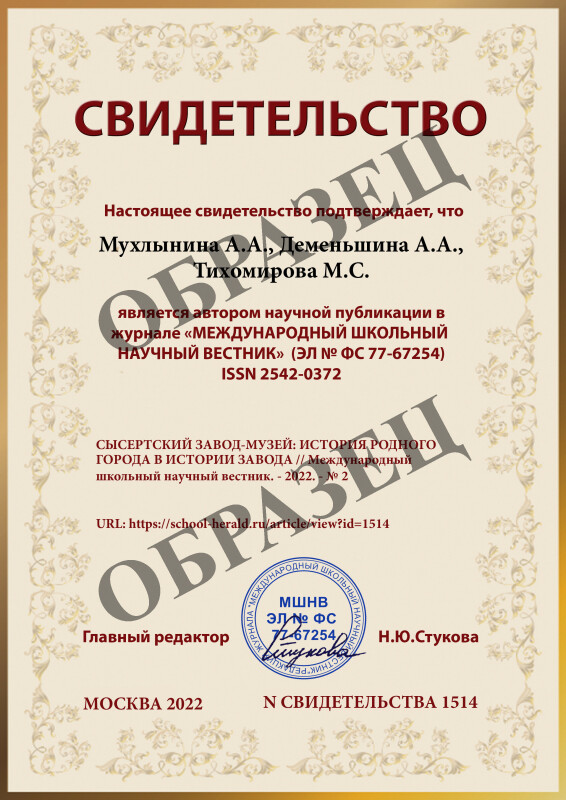 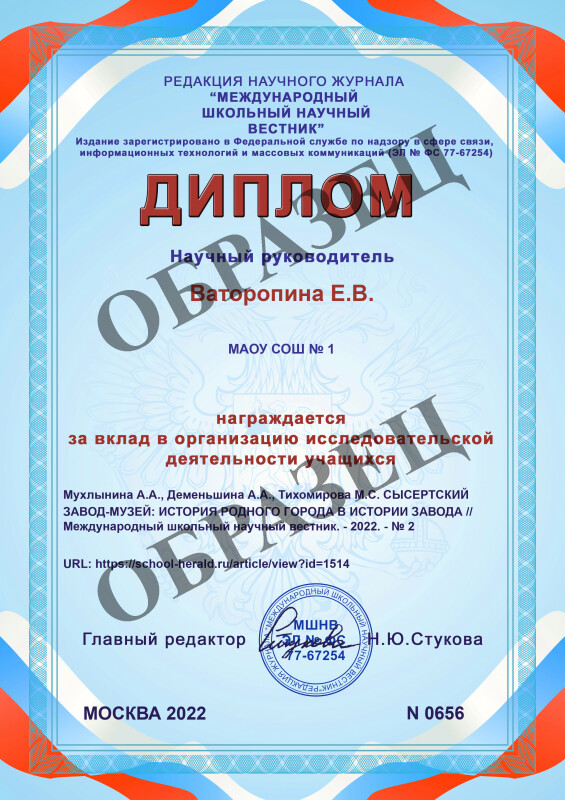 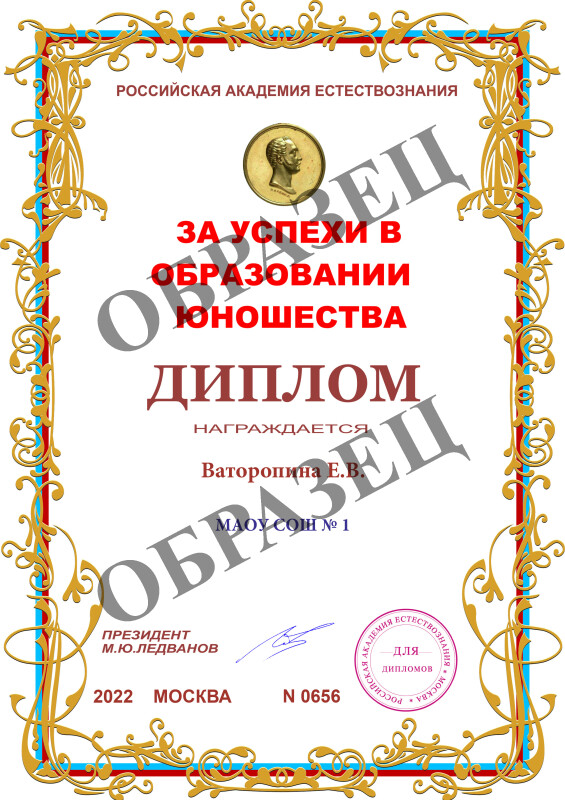 The history of Sysert is the history of the Urals, the history of the whole country. We need to know it in order to become a real patriot of Russia, to understand the prospects for the development of our native land. It is necessary to tell young people more about the history and future of the region where they were born and live, to awaken and develop the interest of schoolchildren in studying their native land, to form a respectful attitude towards the monuments of architecture and the nature of their area.

The aim of the project is to learn more about our native town and to develop students' cognitive interest in studying history of their native land, forming their tolerance and patriotism.

The objectives of the work are:

to study the literature on the topic available on the internet and in the libraries and summarize the valuable information;

to share interesting information about Sysert Plant-museum at the school conference and in the school magazine «Friendship».

The subject of the investigation is the history of the creation and exhibits of the Sysert Plant-museum.

There are three museums in Sysert. They are well-known and popular not only in our town. Many tourists from different places of Russia visit them.

One of the town’s main tourist attractions is Pavel Bazhov’s house. It was opened in 1982. The house holds many unique objects of the Russian peoples’ daily life in the 19thand early 20thcenturies. The exhibits include works made by gifted local artists and also kitchen utensils, spinning wheels, a weaving loom, Russian sledges and other objects created by anonymous folk craftsmen.

Local History Museum. It all started in 1945, when enthusiasts decided to create a small local history circle. In 1975, the museum became part of the Sverdlovsk State Historical and Revolutionary Museum. Today's exposition of the museum occupies five exhibition halls, that describe the history of Sysert from the past to the present day.

We will tell you about one of the youngest, very interesting and unusual museums of our native town – Sysert plant-museum.

From the history of the plant

In 1727, a peasant of the Aramil settlement, Fyodor Babin, announced to the head of the Urals factories, General Wilhelm de Gennin, that in 1680 the Aramilians had discovered iron ore near the Sysert River. They melted metal in small furnaces. The factory’s location was chosen directly by Wilhelm de Gennin. He found this convenient place for a future factory at the confluence of the rivers Sysert and Chernaya in 1731 [1].

The first settlement was based here in 1732, in connection with construction the metallurgical factory on the river Sysert. In 1732, the first buildings of an iron-making and iron-smelting plant appeared, and the history of the Sysert region began.

The Sysert plant became the core of the future mining district. The Sysert plant was built with state money. Therefore, the first owner of the plant was the state. However, the new plant produced less product than the officials of the mining department expected (35,000 poods of cast iron per year). After calculating the losses, the Russian government decided to sell the plant to private individuals.

Aleksey Fedorovich Turchaninov became the new owner of Sysert plant [4]. Before that, he had a small Troitsk copper smelter near Solikamsk. The Russian Empress noticed his diligence and initiative, and he was granted a patent for the rank of titular councilor. In 1753, the Sysert factories with all the forests, lakes, mines, buildings and artisans were sold to him. The new owner had to pay 146,685 rubles 67 kopecks to the state treasury within ten years. But under various plausible pretexts and delays, the state did not receive this money.

For a long time Sysert was the central administrative department of the Sysert mountain district, including the following metallurgical factories – Sysertskii, Polevskoi, Severskii, Verkhnesysertskii, and Iliinskii. Sysert was originally planned and built by Alexey Turchaninov (a famous salt producer and merchant in the Urals) in 1779 – a monument of the architecture of the 18th century.

He did all his best to bring the enterprises out of the crisis state. For 30 years he did a lot for Sysert and its residents. People were given free timber, poles, firewood, mowing. Once a year, the workers had a month's vacation with family support. Medicines, medical care and schooling were free, too. And all that was in the 18th century!

A.F. Turchaninov founded several settlements in the Urals region. Under Turchaninov, a zoo, a winter botanical garden, mineralogical museum, archaeological museum, and a scientific library appeared. During that time, factories flourished. They enjoyed a stable reputation and generated a lot of income for the owner. Sysert factories were among the best in the Urals. The mining of malachite was started.

In the first quarter of the 19th century Sysert’s metallurgical factory was one of the largest enterprises in the Urals. Sysert was known as the administrative center of the rich mountain district, including Severskii and Polevskoi metallurgical factories, tin mines, gold mines and many subsidiary manufacturing enterprises and services. Sysert’s factory smelted cast iron and manufactured iron articles. At various exhibitions the factory received many awards for the excellent quality of its products, on which the brand – the image of a heron, was put.Now we can see a heron on the coat of arms of Sysert.

Sysert plant-museum is the youngest museum in our town. It is being created on the initiative of the local historian Alexander Savichev.

An architect by education and a fanatical popularizer of his hometown, for several years Alexander has gathered like-minded people from among government officials, entrepreneurs and volunteers who consider Sysert the best place to live and are ready to make efforts to bring reality in line with their dreams.

Alexander Savichev said, «I have the most important dream since my childhood. I want to open a museum about the plant at the plant. I want to show everyone the luggage of local lore that I have been collecting for 15 years.»

The museum is dedicated to the history of the Sysert plant from the 18th century to the present day. Fundraising is open for its creation. Soon there will be a demo version of a large museum which the Sysert Development Agency will create as a part of the reconstruction of the plant in a few years [3].

Together with like-minded people, residents of the city, volunteers, businessmen, his friends and family, Alexander transforms the plant into a museum, holds subbotniks, organizes collections of exhibits for the museum, and conducts excursions.

Most of the requested materials were donated to the enthusiast by companies and people who believed in the idea. The premises of the museum are being renovated. The necessary furniture and equipment are purchased. All the information stands have already been made.

The exposition of the museum is about 110 sq. meters. It includes unique exhibits shared by local residents or found on the territory of the plant.

Here you can see rare photos, drawings, and documents of Sysert and its history. Everybody can see and even touch some tools, equipment parts, workers’ clothes, as well as household appliances and other objects of the Russian peoples’ daily life in the 18thand early 20thcenturies.

During the excursion around the museum we learnt a lot of new things about the architectural objects of Sysert, its inhabitants, as well as important events from the history of Sysert Plant and the town as a whole. Our guide Alexander Savichev is a wonderful story-teller! Everyone listened to him with great interest and pleasure. He loves Sysert and infects all the people around him with his love for his homeland.

A well-known Sysert historian Andrei Gornov presented to the museum a super gift - blast furnace boots on old wooden blocks (so that the heat does not reach the toes).

Igor Zyatev, the owner of the «Gorki» Hotel, with the blacksmith Evgeniy Shatunov, presented an agricultural harrow made by blacksmiths 100 years ago.

We met with Alexander Savichev, the leader of Sysert Plant-museum. He answered our questions and told us about some plans of his team.

· The exhibition "Machines of the old Sysert plant" is currently being developed. This augmented reality project is funded by a grant from the Federal Agency for Youth Affairs. In April 2022, the museum will host an animation exhibition about the machines and mechanisms of the Sysert plant in the 19th century.

· From April to September 2022, there will be held 18 free excursions around the museum and 3 lectures by Ural scientists about the history and technologies of the Urals.

· A Cultural-exhibition project "The plant is talking!" is now being developed within the framework of the project "Sysert plant-museum". They are going to record video interviews of the workers of the Sysert plant of the Soviet period and their descendants.

· Educational videos for excursions and lectures are now being made. With the help of modern computer and video technologies, they will revive several persons (i.e. their portraits) who lived in Sysert in the 18th century. They will tell us about Sysert and the plant of those years.

· Audio tours around museum are now being planned to create.

The research and collecting work are now being continued. They collect exhibits about the history of the Sysert plant, which are probably stored in family archives, warehouses, and sheds of the residents of Sysert.

Alexander Savichev and his team have great plans for the future!

The «Summer at the plant» Project

In July 2020, the «Summer at the Plant» project was launched in Sysert. The territory of the Turchaninov-Solomirsky plant, founded in 1723, blossomed with new life [2].

Active actions on the territory of the plant began in June, when the initiators, together with volunteers from Sysert, Yekaterinburg and other neighboring settlements, began to improve the territory and remove the garbage that had accumulated here for decades. During one of these subbotniks, the Gornozavodskaya area (it is located between the blast-furnace and open-hearth workshops) was recreated.

On July 10th, different facilities began to be built with the help of the Urals Creative Camp. The camp was supervised by mentors from the «100 City Leaders Territorial Development Program». During four weeks, practicing architects and artists from Moscow, St. Petersburg and other cities, with the help of camp participants, significantly transformed the site around the historic buildings, filling it with new functions. During 1.5 months, the cluster was visited by 20 thousand people, and dozens of events were held.

At the first stage, a lecture hall, a concert hall, a coffee shop and a pizzeria were created on the site of the old blast-furnace shop.

In July 2021, the second season of the «Summer at the Plant» started in Sysert. According to its creators and numerous participants and guests, it turned out to be even more interesting than the first one. Summer coworking and glamping, individual mini-offices were created. Creative and project teams, small companies have the opportunity to live and work right on the site.

«My native land» is one of the most popular headings of our school magazine «FRIENDSHIP». In each issue there are students’ articles and essays devoted to important events in the life of our native town, materials about our famous countrymen, interesting places, customs and traditions of the peoples of the Urals. Our schoolmates often go on hikes and excursions around Sysert and the Urals. They share their impressions on the pages of the school magazine.

· Working on the project we learnt many interesting and unknown facts about Sysert and its history. We didn’t know that Sysert had such an interesting history and so many famous people had lived there in the past. We love and are proud of our native land.

· We saw many unique exhibits in the museum. They describe another Sysert, but its symbols and signs are still alive. We felt in touch of the past.

· We had interesting conversations with people who had much more knowledge about our native town and the Urals, and they shared their knowledge with us.

We presented our research work at the school conference – https://youtu.be/aQ5CPT2icEg , https://uchportfolio.ru/elenavatoropina/?page=7102.