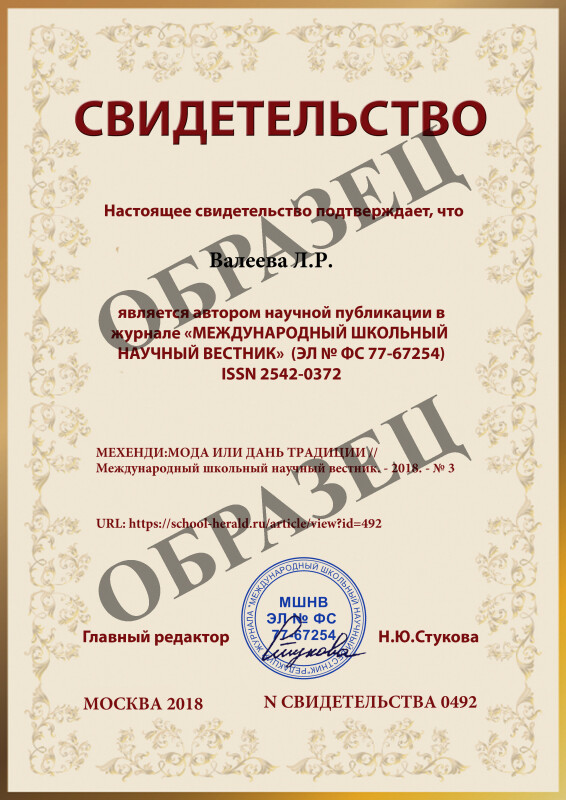 Bodyart is a kind of art made on, with, or consisting of, the human body. The most common forms of body art is Mehndi. In our country it is new. And most people think that Mehndi appeared recently. But frankly speaking it is not so. In Russia Mehndi is considered to be a European culture. It was not European first. Mehndi has been practiced for centuries in many cultures, mainly southern, and spread throughout the world.

Besides Mehndi there is body painting. It is also a kind of Bodyart. But body painting is washable. And even children are interested in it. Nowadays you can often see them having painted faces, hands, legs on New Year’s Day, their birthdays, weddings and other holidays. And one always thinks why it is so looking at them. That’s why the theme «Mehndi: fashion or ancient tradition» is very actual. Seeing Mehndi too often makes you think about the history of these events and their influence on people all over the world.

The aim is to find out if Mehndi is modern fashion or an ancient tradition.

Object of the exploration is Bodyart.

Subject of the exploration is Mehndi

The following tasks were set:

1. To concept of Mehndi.

2. To reveal an origin of Mehndi.

3. To find meaning of Mehndi drawings.

4. To carry out sociological questionnaire.

5. To conduct our master-class «Master Mehndi».

6. To produce the book « Mehndi design».

Hypothesis: we assume that the Bodyart is the most urgent type of activity among young people nowadays.

Theoretical significance of the work: systematization and generalization of material on the research topic.

The practical significance of the work lies in the fact that this material can be used by people, who likes Bodyart.

Bodyart is a kind of art

The concept of Mehndi

Mehndi or «Mehendi» or henna is a paste that is created from the powdered leaf of the henna plant and is made into designs for men and women. Mehndi is derived from the Sanskrit word mendhika. The use of Mehndi and turmeric is described in the earliest Hindu Vedic ritual books. It was originally used for only women’s palms and sometimes for men, but as time progressed, it was more common for men to wear it. Haldi (staining oneself with turmeric paste) as well as Mehndi are Vedic customs, intended to be a symbolic representation of the outer and the inner sun. Vedic customs are centered on the idea of «awakening the inner light». Traditional Indian designs are representations of the sun on the palm, which, in this context, is intended to represent the hands and feet.

A little bit of history

India has developed very much over several years. But it is still a very religious country that follows many traditions. And one of them is painting arms, hands, legs, feet and even faces with henna. It is called Mehndi. [5,с.201] Mehndi showed people’s social status and the belonging to the certain cast. Casts were officially abolished long ago. But it is very difficult to destroy this system in real life. So, they still exist. Also Indian people are considered to be very superstitious. Mehndi isn’t only beauty but also the protection from furious spirits. In some cases Indians draw Mehndi to protect themselves from insects. They don’t use clay for it as African people do. But they use henna. It has special smell that frightens them off. There is no wedding in India without Mehndi n the bride’s hands, arms and feet. The more difficult and various the Mehndi pattern the happier new couple’s life. For Indian people it is a tradition. Henna is used in many countries now. And a lot of tourists visit India. [2,с.123] So, people from all over the world accepted it as a modern fashion. But they don’t use it in every day life. They draw Mehndi occasionally, for some holidays or parties. Looking at an Indian woman we can recognize her at once. But looking at girls and women from other countries with Mehndi we can’t identify their nationality. She can be Russian, British or American, etc. So, tradition has its nationality. But modern fashion is international.

Mehndi in our life

We were interested in meanings of Mihndi drawings. We had to go to the Mehndi master – Elvira Kashapova in our town.

She told us, that there are a lot of Mehndi drawings. Each of them surely has the value and force:

– flowers and leaves – prosperity, abundance, the beginning of new life;

– a peacock – a symbol of the goddess of Sarasvati patronizing art and wisdom;

– a mandala – wisdom, an enlightenment;

Mehndi means power of love in marriage. Mehndi is more dark, the love is stronger. Red color is color of fertility, the power. In the drawing vegetable ornaments, images of birds and animals are used, they symbolically connect the woman with the nature, concepts of the birth, food, growth, regeneration. According to the legend, Mehndi protects from evil spirits, misfortunes, diseases and even death. Many Arab women consider that Mehndi brings happiness and protects from failures. [3,с.35] (Appendix 1)

We conducted a social survey among students (5-8 forms-80 people) of our school and asked them to answer following questions:

2) Have you ever got Mehndi?

3) Have you ever drawn Mehndi?

The results of a sociologic questionnaire.

The responses of students were:

This survey showed that Mehndi is very popular kind of Art in out town. (Appendix 2)

After researching of this topic, we decided to conduct our master-class «Master Mehndi» among my classmates.

We told about the concept of Mehndi, about it’s origin. We told that henna paste is usually applied on the skin using a plastic cone, a paint brush or a stick. After about 15–20 minutes, the mud will dry and begin to crack, and during this time, a mixture of lemon juice and white sugar can be applied over the henna design to remoisten the henna mud so that the henna will stain darker. Also, I explained where it is possible to buy henna. Then, we started to our master-class. Children were happy, they liked my master class. We presented my own book «Master Mehndi» to my classmates. (Appendix 3)

Our own book «Mehndi design»

We decided to produce the book and we hope that students will make Mehndi themselves with great pleasure. Looking at these drawings, people can make Mehndi having painted faces, hands, legs on New Year’s Day, their birthdays, weddings and other holidays. (Appendix 4)

We conducted a social survey among students of our school. The students’ responses were fantastic.

This survey showed that Mehndi is very popular kind of Art in out town.

1. Clay – is a fine-grained natural rock or soil material that combines one or more clay minerals with traces of metal oxides and organic matter.

2. Cutter – is a utility knife

3. Henna (Lawsonia inermis, also known as hina, the henna tree, the mignonette tree, and the Egyptian privet) – is a flowering plant and the sole species of the Lawsonia genus.

4. Pattern, apart from the term’s use to mean «Template» – is a discernible regularity in the world or in a manmade design

5. Phenomenon (Greek: phainomenon, from the verb phainein, to show, shine, appear, to be manifest or manifest itself, plural phenomena)-is any thing which manifests itself.

7. Leather – is a durable and flexible material created by tanning animal rawhide and skin, often

8. Masquerade – is a costumed dance event

9. Silk – is a natural protein fiber, some forms of which can be woven into textiles

10. Skin – is the soft outer covering of vertebrates