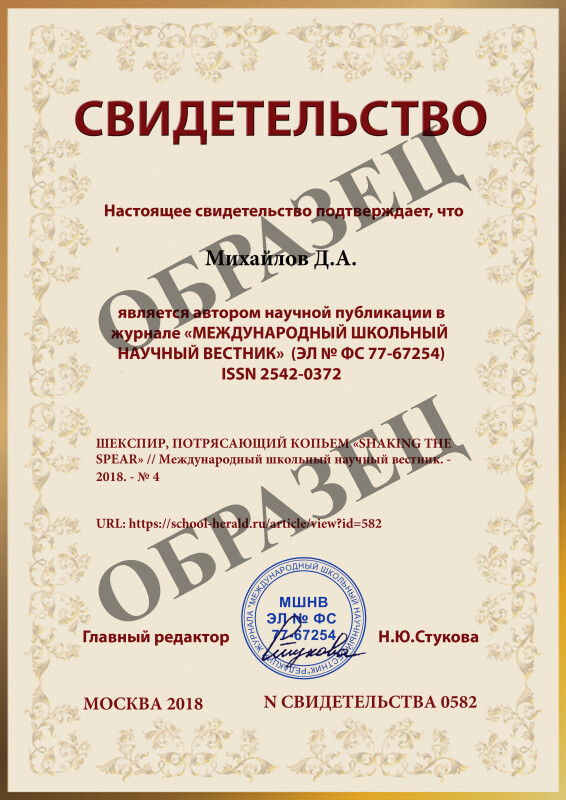 The present interest 2016 was declared to be the year of William Shakespeare. 400 years have passed but Shakespeare’s fame has not faded. His works are still relevant today due to his great humane ideas and realistic characters. The inspirational power of his words was often used by politicians of different times.

All the world’s a stage,

And all the men and women merely players;

They have their exits and their entrances;

And one man in his time plays many parts…

What role did W. Shakespeare play? Was he just a singer of love and freedom or was he as much a patriot too? Let us introduce our research work «Shaking the spear» which is based on the hypothesis that W. Shakespeare was a real patriot who loved his country and considered patriotism a cardinal virtue. Historical plays of Shakespeare reflect his patriotic spirit. The following words of Coriolanus do very well apply to the dramatist:

My country’s good with a respect more tender,

More holy and profound, than mine own life.

The newness We have looked through so-called Shakespearian web-sites, some famous works about W. Shakespeare and «The Complete Works of William Shakespeare» [3] and came to the conclusion that the idea of patriotism has not been sufficiently studied.

The aim of our research is to prove that a great number of Shakespeare’s works expresses the spirit of admiration for his lovely England.

Conclusion Productions, publications, even a «Shakespeare prayer», were devised to recognize not only Shakespeare’s «genius» but more importantly his significance as a «patriot.» Some patriotic ideas of his plays were, thus, not only a product of the patriotic spirit; they were also calculated to infuse patriotic spirit into others.

The Heritage of William Shakespeare

The great poet and dramatist William Shakespeare was a genius formed by the epoch of the Renaissance. He is often called by his people «Our National Bard», «The Immortal Poet of Nature» and «the Great Unknown». [5, p.10] Indeed very little can be told about his life with certainty, as no biography of Shakespeare was published during his life time or for 93 years after his death. Yet, patient research by certain scholars has uncovered the biography, but not fully.

William Shakespeare was born at Stratford – on – Avon on the 23rd of April, 1564. His father, John Shakespeare was illiterate; he marked his name by a cross because he was unable to write it.

During his life-time Shakespeare created a variety of plays and characters. The ideas set out by the Renaissance, the struggle for happiness and freedom are expressed by him in the most realistic forms. Shakespeare’s plays have become so popular in the world because of his great humanist ideas and his realistic characters. Shakespeare did not idealize the people he portrayed. He painted them as they were in his time. He created characters of great depth and unusual intellects.

It’s common knowledge that the traditional approach to Shakespeare was as to a love singer. His 154 sonnets as well as tragedies («Romeo and Juliet», «Othello») and comedies («The twelfth night») are dedicated to love. He was also a judge of human vice and human heart. Shakespeare’s tragedies («Hamlet», «King Lear») are very bloody and about revenge, deception and fate.

The central themes of Shakespeare

Many scholars have studied Shakespeare. These are the central themes Shakespeare dealt with in his plays:

1. The idea of freedom for peoples. This is felt in his tragedies and histories.

2. Humanism. The love for mankind is seen in every play.

3. Freedom for the individual.

4. The idea of patriotism.

5. National unity under one strong king. The last two themes are stressed in «King Lear».

7. The masses as a political force.

8. The themes of love and friendship which are developed in his sonnets and plays.

9. The struggle against cruel medieval blood-feuds (in Romeo and Juliet).

Shakespeare achieved great skill in speech individualization of his characters through the choice of words, and the use of folklore- popular songs, ballads and sayings. That is why the plays are written in the living language of the epoch. Shakespeare’s ideas of love, freedom, humanism and national unity are still very popular. His plays are staged by all the world’s theatres. 14 operas and many symphonies were composed on the themes of his plays. Almost all his comedies and tragedies have appeared in the cinema.

the idea of patriotism in shakespeare’s works

We have looked through so-called Shakespearian web-sites, some famous works about W. Shakespeare and came to the conclusion that the idea of patriotism has not been sufficiently studied. We have gone through some famous Shakespeare’s works and found convincing proofs of his patriotic nature.

The fact that Shakespeare was a true patriot of his lovely England is vividly reflected in his masterpieces. Shakespeare’s characters, although being of different social status, have one thing in common – love and dedication to their Homeland.

The following words of Coriolanus do very well apply to the dramatist:

My country’s good with a respect more tender,

More holy and profound, than mine own life.

The king Henry IV stresses: «It’s my fave play & make me proud to be English!» Richard having returned to England after his short absence greets his «dear land» and «tries to keep it tight to his bosom». Gent before his death makes a flaming speech to the «glorious island», calling it «an earthy Eden». Severe and independent Norfolk, being in exile, is full of grief. He is parted with his dear country and deprived of his native language. And at last, prince Fillip glorifies the country in the historical drama «King John»:

England we love, and for that England’s sake

With burden of our armour here we sweat.

This England never did, nor never shall,

Lie at the proud foot of a conqueror,

The real King Henry (1387-1422), ascended to the throne of Henry IV in 1413 and two years later invaded France. The play is a patriotic, epic portrayal of a phase in the bloody hundred years war that started with the landing of Henry’s troops near Harfleur and the legendary victory at Agincourt. Shakespeare’s «Henry V» is a complex play, packed with themes. In this chapter, we tackle the key themes of war and patriotism.

At the same time, however, Henry employs a second strategy whereby he inspires his men with a nationalistic patriotism, urging them to do honor to their country and prove that they are worthy of being called English. This sense of a shared national creed is somewhat more sophisticated than the urging to primal violence, and Henry turns away from the blunt physical description in the early part of his speech to a more complex rhetoric that combines historical reference, a sentimental appeal to family pride and reminders of birthplace. At the end of his speech, Henry attaches St. George, the patron saint of England, to his legendary battle cry, providing his men with a treasured and familiar symbol of the patriotic ideals he espouses in his rally cry. King Henry praises the fighting merits of his countrymen and call them all, both commoner and nobleman alike, «Noblest English».

Be copy now to men of grosser blood,

And teach them how to war!

And you good yeomen,

Whose limbs were made in England, show us here

The mettle of your pasture; let us swear

That you are worth your breeding; which I doubt not;

For there is none of you so mean and base,

That hath not noble luster in your eyes.

I see you stand like greyhounds in the slips,

Straining upon the start, the game’s afoot, Henry’s challenge is to turn his troops’ small numbers into an advantage, which he does by convincing his men that they have all come there to fight for honour, for justice, and for glory. He makes fighting with him at Agincourt sound like a privilege, one that will allow its participants to capture more glory than anything else could.

The book is full of fighting scenes, and victories. It is a story to stir the blood, and filled with patriotic speeches that are strangely reminiscent of Winston Churchill’s speeches during World War Two. The inspirational power of his words was often used by politicians of different times. Thus, at the outbreak of the First World War in 1914 a huge recruiting campaign was generated all around the country. Shakespeare was thought of as the ultimate patriot and his plays dealing with foreign conflicts, were often brought out at times of international dispute.

In Stratford, the birthplace of W. Shakespeare, a special performance of «Henry V» was mounted. At the end of the performance the company marched on stage holding spears.

Stratford had a great reputation for recruitment: in 1914 a great number of young men signed up. The citizens of Stratford raised money generously for the needs of the front. During the Second World War «Henry V» was screened staring Laurence Olivier. It was in 1944, at the time of opening the second front. The film played a great role in raising combat spirit of British soldiers.

We came to the conclusion that a great number of Shakespeare’s works express the spirit of admiration for his lovely England. Productions, publications, even a «Shakespeare prayer», were devised to recognize not only Shakespeare’s «genius» but more importantly his significance as a «patriot.» Some patriotic ideas of his plays were, thus, not only a product of the patriotic spirit; they were also calculated to infuse patriotic spirit into others. Shakespeare’s ideas of love, freedom, humanism, national unity and patriotism are still very popular. His works are staged and screened all over the world. The historical play «Henry V» is the most iconic of Shakespeare’s plays for the representation of English character and spirit.

The King’s dramatic speech before the Battle of Agincourt from the movie by Kenneth Branagh of 1989 is a brilliant example of his inspirational call-to-arms addressed to his soldiers who are to withstand the outnumbering enemy forces.

And say, «To-morrow is Saint Crispian.»

Then will he strip his sleeve and show his scars,

And say, «These wounds I had on Crispin’s day.»

Old men forget; yet all shall be forgot,

But he’ll remember with advantages

What feats he did that day. Then shall our names,

Familiar in his mouth as household words,

Harry the King, Bedford, and Exeter,

Warwick and Talbot, Salisbury and Gloucester,

Be in their flowing cups freshly rememb’red.

This story shall the good man teach his son;

And Crispin Crispian shall ne’er go by,

From this day to the ending of the world,

But we in it shall be remembered-

We few, we happy few, we band of brothers;

For he to-day that sheds his blood with me

Shall be my brother; be he ne’er so vile,

This day shall gentle his condition:

And gentlemen in England now a-bed

Shall think themselves accursed they were not here,

And hold their manhood cheap whiles any speaks

That fought with us upon Saint Crispin’s day.